Military spouses are known for their sense of community. When times get tough, they turn to one another for help and support. Given their unique situations, military spouses form a bond unlike any other, which often leads to lifelong friendships. These relationships are extremely important for spouses trying to cope with the stress and unpredictability that comes with life with the military. However, when it comes to forming meaningful business relationships, it’s often necessary for military spouses to venture outside of their military communities. There’s a growing trend among military spouses to pursue careers and business ventures that work with their often busy schedules. Many are resorting to entrepreneurship, giving spouses the power to choose their hours and schedule while generating an income for their families. Unfortunately, with constant relocations and overseas assignments, it can be difficult to create and maintain relationships with other business-minded individuals outside the military community, emphasizing the need for strong networking skills. Networking is crucial in gaining valuable connections in specific fields. There are a variety of different ways that military spouses can network effectively, regardless of their situation. Learn more below:

Networking events present like minded individuals with the opportunity to come together, mingle, share ideas, and form relationships. These events can come in all shapes and sizes, often revolving around a common interest. For example, there may be a networking event centered around graphic design, where graphic designers from around the city can come together and share their stories with others in the industry. These events offer military spouses the chance to find friends, professional acquaintances, and potential business partners outside of the military community. Many of these connections can offer advice, inspire an idea, or introduce you to other valuable connections. For spouses of active duty service members that want to expand their connections and a network of professionals, networking offers the perfect outlet. 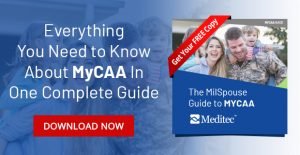 For military spouses that have difficulty commuting or making time for networking, social media offers another way to reach out and network with like minded individuals without having to leave home. Thanks to platforms like Facebook, LinkedIn, Twitter, and Reddit, it’s easier than ever to find others with similar interests and goals. Many of these sites have specific groups for almost any kind of profession or industry. This makes is simple for military spouses to connect with individuals around the world and network. More professionals are finding everything from mentors to co-founders on social media, and it’s likely due to its ease-of-use and convenience. Social media offers military spouses the benefits and perks of networking, without having to leave their home. With that said, it’s important that these spouses know the best practices for networking, and understand how to represent themselves professionally on social media. Unfortunately, social media has its drawbacks. Given how easy it is to create a profile, it’s possible some of the users that are networking are not representing their true selves. When trying to make legitimate connections, it’s important to set up time to speak on the phone or through video chat.

Life as a military spouse can take you all around the world. With each new assignment often comes a new base, new experiences, and new friends. Using the techniques used to make connections on military bases to network with others can be very advantageous when trying to make connections outside of the military community. While it’s always a challenge at first, you should never doubt your ability fit in and find your role in the community. If you start networking now, at a time when you’re meeting new people all the time, you’ll be surprised a few years from now regarding how connections you’ve made and how some of them could factor in on the next part of your journey.

END_OF_DOCUMENT_TOKEN_TO_BE_REPLACED

See if you qualify today.